Samsung is to offer no less than five versions of the 850 EVO which includes a 120GB, 250GB, 500GB, 750GB and 1 TB models. The sample that has arrived in our secret test facility is the 120GB version of the drive (other models will be reviewed later on). The 850 EVO series will come with Toggle NAND, flash memory from Samsung’s new 1xnm node. As stated we expect that to be 19nm.

Coming from the 850 and 850 Pro you’ll notice that Samsung now is using the MEX controller. In fact there’s an easy way of explaining that name, the MCX controller was used in the 830, the MDX in 850 and 850 Pro and the MEX is now used in the 850 Evo. That means these are small evolutionary changes based on the same architecture.

So basically these are small improved respins of the same controller used, and yes it uses the very same 3-core ARM Cortex R4 base product. The controller however has received a clock frequency change from 300 MHz in the MDX to 400 MHz for the MEX. That boost alone is responsible for quite a bit of the performance improvements of the EVO series. This is a triple-core ARM-based controller that is of course SATA 6Gb/s compatible and can be paired with the latest 1xnm NAND flash memory. The MEX controller itself is based upon an ARM Cortex R4 (400MHz) processor. It has three cores that can execute multiple instructions at once, allowing, for example, one to be used for reading data, one for writing data and another for optimization. And that fact all by itself makes Samsungs claim on superior multi-tasking a very likely one. 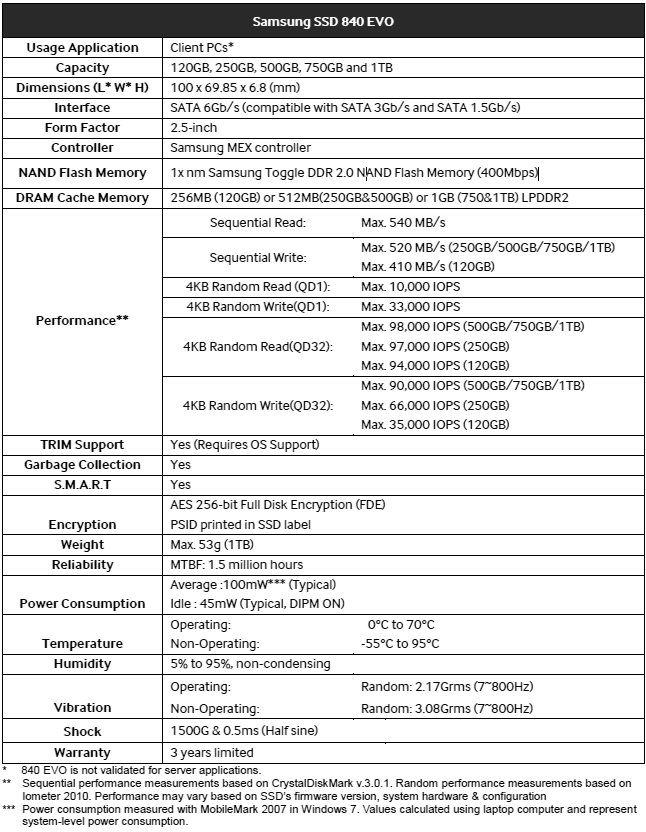 A new and interesting feature on the EVO series is called TurboWrite, which is going to help out greatly with the smaller 120 and 250GB versions of the EVO SSDs. As you guys have been able to read by now, the new EVO drives make use of TLC (Toggle) NAND memory in which data is stored in a 3-bits wide cell. The advantage there is that you need fewer cells to write/store and thus that makes NAND cheaper overall. The downside however is that programming TLC NAND takes a bit longer than your average MLC or SLC based NAND chips, hence the slower write performance you see overall.

This is where TurboWrite comes into play. On all EVO drives Samsung now uses a fixed part of the available NAND as a buffer. These TLC cells will be used as SLC (one bit per cell) which allows them to be programmed faster. So for that specific buffer all write transactions now will be written as SLC and this can be speed up tremendously. Writing one cell instead of three available does mean another 3:1 volume reduction of the storage buffer. The size of the buffer is based on the volume size you purchase, meaning the 1TB model reserves 36 GB of the TLC storage, which divided by three means a 12 GB SLC buffer (as only one out of three cells is being used to write). The 750 GB has 9 GB buffer, the 500 GB has 6 GB and the 250 and 120 GB models each get a 3 GB (3GB effective) buffer.

Here’s a culprit though, only once the SSD is in IDLE the SLC buffer will write to the TLC memory to prevent a huge bottleneck, meaning that there will be several scenarios where you can see ‘reduced’ write performance, example once your SLC buffer is full and inbound data is still written, performance could cave in. But realistically, these buffers are huge of course. So for consumers really, we doubt you’d ever notice it, but yeah, we have been able to emulate this:

So if you’d copy a MKV movie of 8 GB, or a DVD ISO image towards the SSD, once that buffer is full .. the performance will drop below 200  MB/sec on sustained write performance. Only once the SSD reaches an IDLE state, the cache is written out to the TLC partition and the buffer gets purged. TurboWrite is a very clever trick, but we do prefer manufacturers to use a nice large RAM buffer, as the utilized and reserved NAND partition eats away a precious chunk of your expensive NAND flash memory. Samsungs didn’t pursue that alternative to make a cheaper drive, but also had power consumption in mind. The lifetime expectance of the SLC partition is 50.000 P/e cycles. Since SLC only writes a 0 or 1 wide to the cell only two charges per cel are needed, instead of 8 for TLC writable cells. So you shouldn’t be too worried that the SLC partition would die off anytime soon. BTW we verified with Samsung that SHOULD that occur, then the SLC partition disables itself and you can still use the SSD in a normal fashion, just without an active cache.

There are no reviews yet.

Quote List
close
Start typing to see products you are looking for.